Examples of light chairs and the rooms in which they were used from documents of the time. 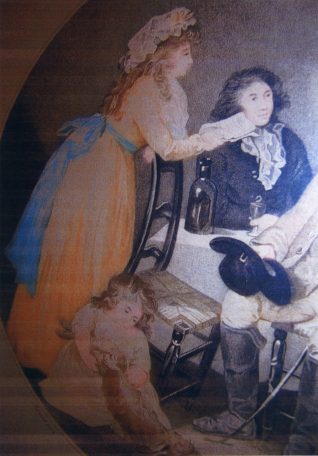 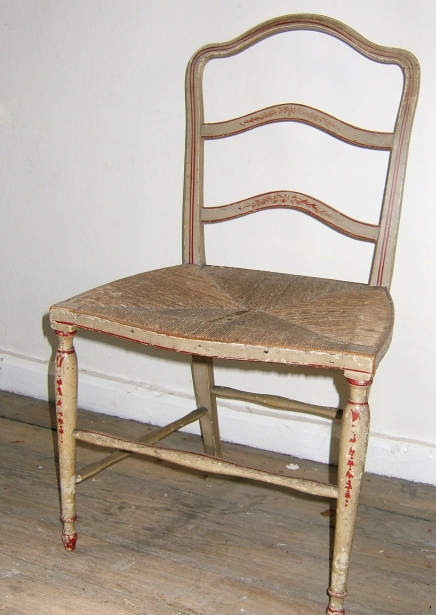 On 12 October 1788 light chairs were supplied by Gillows for different rooms in one of John Christian’s properties in Cumberland comprising ’36 very neat and light japanned chairs ornamented in different colours and varnished, matted bottoms (rush seats) @ 9/6′(ref 344/12). Such chairs probably include some of Gillows’ rush-seated japanned Cottage chairs with red ornamentation (fig. 4) and patera spindle back chairs (Figure 5) which were supplied to customers at a similar price.[1] This example of a patera spindle back made of ash still retains vestiges of its original green groundwork and was manufactured by outworkers such as John Harrison who supplied Gillows on 7 April 1792 with 6 of these chairs @3/8 according to the Petty Ledger (ref. 344/76).

An entry in Gillows Lancaster Waste Book dated 29 March 1796 refers to the dispatch of ’12 elegant japanned armchairs bunches of flowers richly painted on the backs/fancy backs/canvas’d bottoms’ @40/- together with 12 canvas cushions @ 7/6′ to Thomas Harris of Moseley Street, Manchester.

On 9 May 1796 ’10 handsome japanned armchairs with cane bottoms fancy backs’ were dispatched to Sir William Gerard of New Hall, Garswood, Lancashire for his back drawing room @37/- and cushions @ 6/6. Such elaborately decorated cane seated chairs with canvas cushions, may refer to lozenge back (Fig. 1) or the Garforth pattern chairs, which were illustrated in Gillows Colour Pattern Book (1775-1800), and dispatched to customers at a price above the japanned armchair versions (refs. 344/19, 735/1).

Claudius Loudon’s 1839 Encyclopaedia refers to certain types of rush seated bedroom chairs of ‘a light sort for common use’, which probably explains the continuity in the use of the terminology ‘light chairs’ (p.322).

By the nineteenth century many features of these japanned and stained light chairs had become absorbed into nineteenth century regional traditions of rush-seated chairmaking. Furthermore although trade directories suggest continuity in the manufacture of fancy chairs, Claudius Loudon’s edition of The Encyclopaedia of Cottage Farmhouse and Villa Architecture and Furniture published in 1839, indicates that the term fancy chairs now referred to chairs with frames made in relatively expensive fancy hardwoods such as rosewood, maple and satinwood followed by a coat of French polish. However, a hand-written annotation to the title page of the pattern book of Amos Caton (1864-1895) reads ‘Mr Amos Catton, Chair Manufacturer, High Wycombe, Bucks, Late Savage’ above a printed introduction reading ‘WM. COLLINS & SON Manufacturers of all kinds of CANE AND FANCY CHAIRS, In Birch, Cherry, Sycamore, Walnut, Oak and Mahogany Woods, or in imitation of the above woods’, probably using stain. Illustrations in the pattern book include ‘fancy-back willow seat chairs’ as well as ‘banister back rush-seat chairs’ probably for more modest dwellings, suggesting that a diverse customer base continued to be served by such firms throughout most of the nineteenth century.

[1] Patera spindle back chairs and drapery back chairs include roundels or a flattened side to ball shape detailing on the turned cross rails holding spindles in place and in the case of drapery backs the spindles support the horizontal drapery features. The term patera refers to roundels or circular discs applied to all types of furniture which were often carved or decorated and is derived from classical Roman and Greek traditions. The spindles sometimes feature vase shapes or include a further roundel or patera detail mid-way up each spindle.